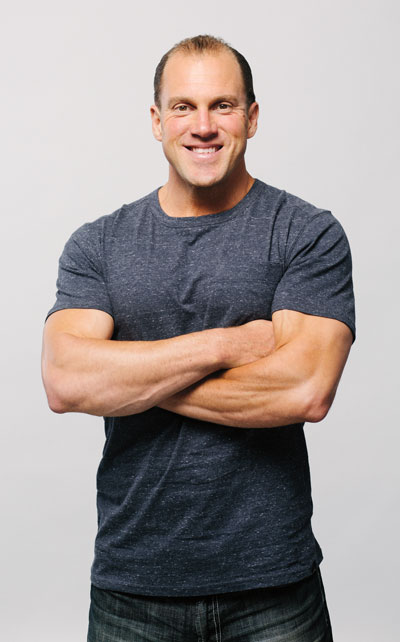 This excerpt is Part 1 of a shortened version of the story Greg Amundson tells in the introduction to his new book FIREBREATHER FITNESS.

I was in the first week of my field training as a Deputy Sheriff in Santa Cruz, California, when my training was put to the test. I was apprehending a parolee who decided he was up for a battle. The fight started and we quickly went down to the ground—it was both a wrestling match and a battle of wills.

It quickly became apparent that I wasn’t physically prepared for an all-out street fight. I felt like I was breathing through a straw. My heart pounded wildly and I was gasping for air. I tried to produce a forceful punch or throw, but the muscles I’d supposedly been training felt lifeless.

The truth hit: I wasn’t ready for the harsh reality of the job. The training had failed me. In an impromptu fight with a random parolee, I could barely hang on.

I went seeking advice and got some from local martial artist and longtime friend Sam Radetsky of Santa Cruz, California. He told me about a “crazy coach, doing crazy workouts, inside a crazy little gym in the corner of a Brazilian jiu-jitsu place.” His description alone piqued my interest, and I felt compelled to learn more.

I looked it up in the phone book. There was a listing for “crossfit,” in all lowercase letters. It was a weekday in December 2001 when I dialed the number and heard a voice on the other end of the line. “Hello?”

The voice belonged to Greg Glassman, who I later learned was a personal trainer who had been kicked out of every gym he had worked in for his unconventional methods. Even more interesting was the fact that Glassman’s original relocation, from Los Angeles to Santa Cruz, was to work with a team of deputies from the Santa Cruz County Sheriff’s Office. Apparently, the training was too hard for the deputies, and he lost the contract. So he had gone out on his own and opened up his own gym.

“Come by tomorrow morning. Be here at 6.” He gave me the address.

It was chilly the next morning, and as I drove along Research Park Drive, past a number of commercial facilities where you’d never think to find a gym, I thought, “I must have gotten this wrong.” I pulled into a small parking lot next to a series of warehouse spaces, at an address that looked like a large storage unit, complete with a roll-up door.

Puzzled, I knocked twice. Greg Glassman answered the door with a smile and extended his hand. “You can call me Coach.”

This is weird, I thought. The only people at the gym were me, Coach Glassman, and Mike Weaver, a black belt in jiu-jitsu who said he was there to do some extra training. Mike was the fiercest man I had ever seen in my life, with a razor-clean shaved head and thick cauliflower ear (or wrestler’s ear). He would go on to become one of the first American black belts to win a jiu-jitsu tournament in Brazil. Legend had it that following the victory, he had to be escorted out of the country. One of Mike’s great quotes was, “If you’re doing CrossFit and competing in jiu-jitsu, then it’s like you’re cheating if your opponent is not.”

The place didn’t look at all like the gym we trained at during the academy. It was like something you’d see in a photo from a history book on oldschool physical conditioning. Rather than the technology, machines, and mirrors I was accustomed to at a gym, this little place in an obscure part of Santa Cruz had items like medicine balls, barbells, a rope, and gymnastics rings hanging from the ceiling. Everything was clean and in order. The floor was pristine and there were Olympic weights and barbells neatly aligned and stacked. A large whiteboard hung on the wall.

Greg informed me that I would be working out against Mike. Against him? This statement just added more confusion to my situation. We were led up a flight of stairs to a shallow balcony that was home to two rowers.

We were told that we were going to start off with a 1,000-meter row. To which I thought, Big deal. We then went back down the steps, and I was introduced to my first kettlebell. Kettlebells were invented by Russian farmers in the 1700s as weights to measure crops. They were eventually introduced at local fairs for strongman competitions. The kettlebell looked about as old-school as a piece of exercise equipment could look, like a bowling ball-shaped hunk of iron with a handle forged onto it. Coach Glassman gave me one that weighed just 35 pounds. Mike had one that was probably about 53 pounds.

Thirty-five pounds. I thought, Are you kidding me? I wanted to protest and explain that I’d been trained at the Police Academy and had used much higher-level contraptions, like curl machines.

But I stopped myself, thinking: Be nice and be gracious. Don’t judge it.

Then we were lead over to the pull-up bar. Pull-ups would apparently also be a part of this workout competition between Mike and me.

I had the plan: We would row 1,000 meters, then come down the steps and perform 21 of the kettlebell swings I had just been taught, then we would do 12 pull-ups.

“After you’ve completed one round,” Coach informed me, “we’ll think about a second.”

My ego stirred again. Think? I must have forgotten to mention to him that before my training at the academy, I had played water polo for the University of California Santa Cruz.